The Problem:  How could a three person band be encased inside of a traveling, self-supporting lovecraftian octopus costume with an outer skin studded with arrays of responsive lights, and also be compacted and resurrected repeatedly during an East coast art/sound space performance tour into less than five cubic feet?

The Solution: By using a central mast and a series of windlasses and rotating trusses suspending a folding wire framework, which in turn suspends a handsewn metallic fabric skin with integrated electronics, sensors, and lights, the project came to life.  Soldering together LEDs and batteries in long circuits allowed the entire suit to be illuminated, while much scrounging in municipal waste yards for the right traffic lights and conduit allowed the eyes and skeleton of the creature to take shape.

The three band members inside of the creature reach out to their instruments through the undulating tentacles of the giant octopus and see through hidden mesh view ports, allowing the creature itself to play the music and stun the listeners through all sensory input ports. 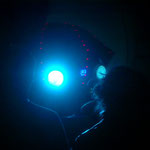 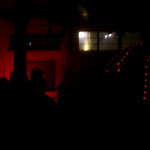 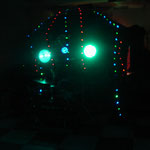 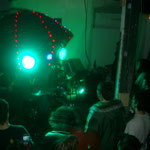 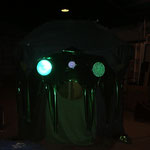 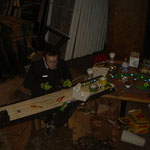